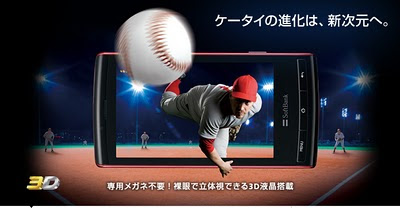 I miss living in Tokyo, where every week there would be some cool new device that would show up on the streets of Akihabara.
From cnet..."But it's the 3D stuff you really want to know about. The 3.8-inch displays will use 3D technology similar to Nintendo's forthcoming handheld. The screens use what's called a parallax barrier, making each eye see a slightly different image. This creates a stereoscopic display -- an image your brain perceives as 3D.
Doing it the Sharp and Nintendo way, without headgear, is called autostereoscopy. The only problem is you have to keep your head reasonably steady in front of the screen to see the 3D image. This isn't good for 3D TVs, but for small handheld screens it's definitely workable."
Read more: http://crave.cnet.co.uk/mobiles/sharp-galapagos-3d-phone-popping-out-in-japan-doesnt-need-glasses-50001428/#ixzz1Arjx9a93


Video of Sharp 3D
Posted by Steven Sherman at 6:21 PM