time to read something that does not have computer code in it... 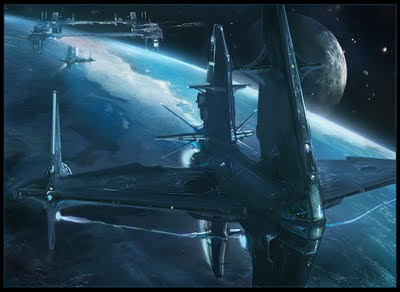 British author John Love just sold his debut novel, Faith, to Nightshade Books, and it has a huge widescreen premise that sounds like the perfect mix of space battles and politics.
Top image by Jabraniho, via Concept Art Forums
"a sci-fi mix of Moby Dick and the classic movie Duel, in which an unknown, invincible, Kafkaesque alien ship has returned 300 years after breaking one galactic empire to now threaten the human Commonwealth, and the best and brightest minds that are sent in a invincible ship of their own to stop it, with the only problem being that those best and brightest are also some of the Commonwealth's most twisted sociopaths and if they win, the human empire may find itself in more danger than ever."
"
Posted by Steven Sherman at 1:27 PM