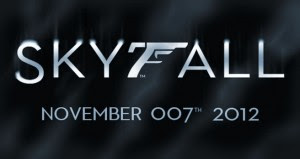 Bond 23 has been going through more troubles with title speculations and MGM’s financial troubles which resulted in the movie to suspend development throughout 2010.

Pre-production started in January this year there was an official release date given for Bond 23 to hit the screens on 9 November 2012 by MGM.

The details of said presser have been shared on the official James Bond Twitter account — @007, of course. Here's what we know:

— Javier Bardem, who owned the Coen Brothers' "No Country For Old Men" as the evil Anton Chigurh, will play the "Skyfall" villain.

— Series regulars Dame Judi Dench and Daniel Craig will be back, reprising their roles as M and James Bond, respectively.

— "Skyfall" has its own story, unrelated to the previous two Bond films ("Quantum of Solace" and "Casino Royale") — the relationship between Dench's M and Craig's Bond is more central to the action.

Posted by Steven Sherman at 4:15 PM